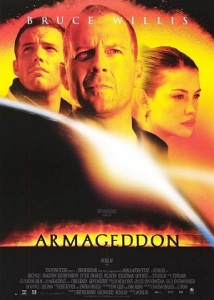 I was surprised when I found out ‘I Don’t Want to Miss a Thing’ by Aerosmith, one of the most beautiful love songs ever made (in my opinion), has been performed for a movie. I decided to check this one out.

Imagine you’re just walking your dog on the streets of New York, when suddenly pieces of rocks start falling from the sky destroying cars, building and killing people. Crazy, right? And that’s just the prelude for the concert of a massive asteroid approaching Earth to bring the ultimate end to the whole life. At this point the probability of events shown in the movie reaches its maximum.

At the N.A.S.A. scientists gather to find the way to save our noble planet (sadly, no, not from the pollution). A plan prepared by military experts is ridiculed by the man described as the most intelligent in the whole world (yawn!). (Interestingly, his greatest contribution to the Earth-saving project is moving a stick with a model asteroid attached to it while presenting the chosen tactics much later to the participants of space mission). In the end, the scientists decide to place nuclear load inside the enormous cosmic rock and detonate it at the right moment.

The plan requires to send there experienced and skilled staff with geological knowledge. Harry Stamper (Bruce Willis) who is said to be the best oil-driller in the world (yawn, again) gets his call of duty for the mission. Just after he found his worker – A.J. (Ben Affleck) was dating and sleeping with his beloved daughter (Liv Tyler). Tough day for a tough man, you could say.

Anyway, he then recruits his co-workers  to take part in the project with him, along with A.J. None of the men (of course…) tends to hesitate with the decision whether to go or not, as if they were going on life-threating space trip once every month. Some sentenced, notorious law-breakers and mostly not giving the impression of sharp-witted are supposed to be the heroes of all the time. Seriously, is that as good as we can get? Really? Perhaps the ultra-fast training at N.A.S.A. can help bring the heroesness out of them. Perhaps…

At the beginning the action seems pretty tense and dynamic – even too much, which may be confusing and give the impression of watching rather summary or highlists, not the movie itself. It then slows down dramatically as characters enter the space. It actually goes too slow, as apart from saving life on Earth they can still argue and do foolish stuff. Cause they have time. Urgh. Come on, when will the bombs explode and destroy the freaking asteroide?!

I would decribe the film as a science-fiction fairy tale for adults. Too many cliches, too many illogical actions and lack of reflection at some crucial moments. A Russian astronaut representing all the stereotypes an American may have about Russians (and a t-shirt with a CCCP inscription on a red star as a bonus). Again: seriously? Apart from the unreality, this fairy tale brings some sad, often too affected moments of drama. Which – I have to admit – I have fallen for, and my tears as well. The editing annoyed me, especially in the fast-action part.

The music is pretty good, though.